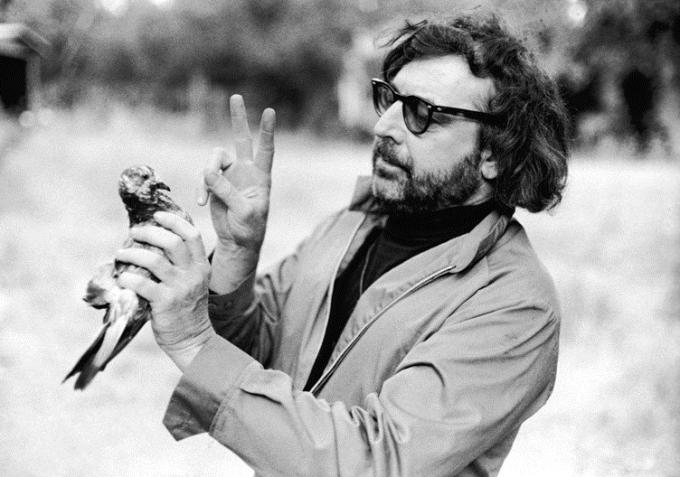 February 6, 2014 In Indiewire By nancynigrosh

How Screenwriter Terry Southern Prepared Me for a Career in Hollywood

Some people debate the value of film school. I’m not one of them.

Terry Southern’s NYU master screenwriting class was held on Tuesday nights at Remington’s Bar, a basement dive on Waverly Place. Trudging through the ice-hardened sidewalk, I noticed his beat up Ford Mustang with the broken canvas top barely covering up the snow from the storm night before. I always wondered how he’d made it back to Connecticut in that thing.

Terry was one of a kind, a truly badass screenwriter. Even in the revolutionary times of the 1960’s and ‘70’s, the author of the geared to shock novel, Candy, also wrote screenplays for Dr. Strangelove, Easy Rider, Barbarella, and many other films that scored bull’s-eyes at shaking up the status quo.

I nodded to my classmates, who each nursed a coke or a beer at the counter. In turns, we sauntered over to Terry’s table, where he presided in kingly fashion, and gave insights into the magic of professional filmmaking. There were six of us, so we got roughly half an hour each. By ten o’clock, Terry was in a world of his own, yet still adept at letting us in on Stanley Kubrick insider stories and cool anecdotes about the scenes behind the scenes of Easy Rider.

His advice was punctuated by references to classical drama that he connected to anecdotes about the films he’d written. Referring to The Magic Christian, one of his own novels he’d adapted for the screen, he became incensed that Ringo Starr, Peter Sellers and “all these other limey pricks” didn’t see that “Hamlet and his problems” were an expression of emotional excess that couldn’t be exposed simply by indulging in excess on screen. It seemed what he was really teaching us was something else other than writing, something about the reality of being a writer. He actually adored these “pricks,” who were his comrades-in-arms. But only they could get away with behaving outrageously. As a writer, Terry found out there was a double standard when it came to being creative. He had to bear the architectural burden of responsibility without the advantage of being in control.

Each of us pitched a story to Terry. He seemed to be listening and weighing words on some invisible scale only he knew the value of, followed by oblique commentary until he finally dug out a golden nugget and tossed it with a knowing raised eyebrow reminiscent of Durand Durand from Barbarella.

I’d just seen Louis Malle’s Murmur of the Heart, so I pitched a forbidden love story between an immature actress in her twenties and a teenage boy actor, and framed it as a film-within-a-film. Fueled by pretentious schoolgirl logic I said, “I just worked on a feature and can see that filmmaking creates a heightened state where the rules just don’t apply…” He interrupted by exclaiming, ”I want to write this with you! I know all about what goes on on movie sets, so it’ll be authentic!” I was flattered and didn’t quite know how to respond. “You’ve never even been to California!” he concluded, shaking his head. It was odd that he was the one pitching me. I couldn’t quite believe it.

“How would it work?” I shrugged. He explained, “You write pages, send them to me in Connecticut and then I make comments and add to them, then mail them back, ‘Special Delivery’, wherever you are.” The plan was to collaborate through the post office, and of course, we’d write cutting edge, wild and subversive projections about how a girl in her 20’s – if left to her own dark devices, might behave. Little did I know this process would take nearly two years. Fat manila envelopes from Terry covered with red ink stamped “S.W.A.K.” and “Good Grief!” would ebb and flow. He also sent copies of his books, Red-Dirt Marijuana and Blue Movie, complete with scrawled notes I wasn’t sure were for me personally or well-thumbed copies he had lying around.

On our script’s pages, Terry vented all too real frustrations he’d had on the films he’d worked on with mind blowing insights into a screenwriter’s travails.

My contributions were more romantic and melodramatic, befitting my naïveté. Nevertheless, Terry gallantly told me how talented I was. He suggested I apply to UCLA’s MFA screenwriting program, move to L.A. and take my shot. He said he’d write a recommendation. He did. Within months I was on the road, traveling cross country.

Westwood seemed benign, even sleepy, but just as Terry hinted out loud, L.A.’s ‘70’s casual suburban façade was an intimidating mental construct even more self obsessed than the one he’d conjured in our script. His potent warnings about Hollywood made me fearful, and, at 22, I was still just a kid with a lot more living to do. It became clear I wasn’t destined to become a screenwriter after all.

Little did I realize at the time how well Terry had prepared me for the career I did end up having in Tinseltown years later as a literary agent. In spite of the supportive yet subversive film folks he’d worked for, Terry was well aware that he’d been lucky. With a killer smile he advised, “Court luck, keep your thumb out, and like D.H. Lawrence said, ‘when you’ve got something to say, say it hot.’ Somebody’s gonna want whatcha got.”